MOUNT WILSON OBSERVATORY UNDER THE LENS
AT ALTADENA HISTORICAL SOCIETY PROGRAM
Monday Oct. 26, 7:30 p.m.
Altadena Community Center, 730 E. Altadena Drive
Don’t miss this talk about the history of the world-famous Mount Wilson Observatory at 7:30 p.m., Monday, Oct. 26 at the Altadena Historical Society by retired aerospace engineer Christopher Purcell, from the Mount Wilson Institute.
Founded by astronomer George Ellery Hale in 1904 with funding by the Carnegie Institution, the celestial observatory is located on top of 5,710-foot-high Mount Wilson, above Altadena in the San Gabriel Mountains. It was at the Mount Wilson Observatory that famous astronomer Edwin Hubble was able to prove that the universe extends beyond the Milky Way Galaxy, and to the subsequent view that the universe is actually expanding. 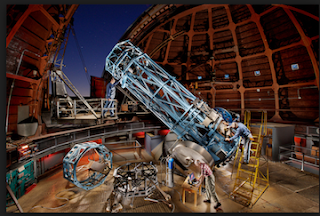 Speaker Chris Purcell spent nearly 40 years in the aerospace industry, much of it related to spacecraft launch, trajectory analysis, and orbital control.  He has a bachelor’s degree in astrophysics from UCLA and a master’s degree in aerospace engineering from USC. He is a docent with the Mount Wilson Observatory, the non-profit organization that runs the observatory.  His talk will be accompanied by slides, and be followed by a question-and-answer session. The program is free and open to the public. 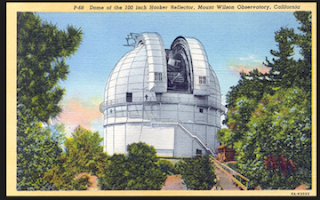