Efforts by Altadena Historical Society and Los Angeles County staff have resulted in the installation of the historic Echo Mt. Trail signpost in the courtyard of Altadena Community Center – a project 12 years in the making. 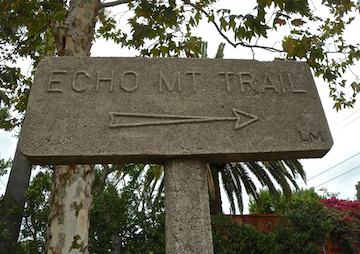 The concrete sign with an arrow pointing to the trail head was found by Altadenan Jack Stivers after the Mt. Lowe railway was discontinued and the tracks torn out in the early 1940s. Jack donated the signpost to AHS in 2003, with the wish that it be erected at the new Community Center, a Los Angeles County facility.  The sign remained in storage until AHS and the county recently renewed efforts to get the artifact installed.

The 100 year old directional sign was originally located on the Mt. Lowe railroad right-of-way near Maiden Lane and Mt. Curve Ave.  It pointed towards the trail head that today is called the Sam Merrill trail.  The three mile trail begins at Cobb Estate at the top of Lake Avenue and leads to Echo Mt., a summit that once featured a 40-room hotel, dance hall, observatory and zoo.

You can see the sign any time at the Altadena Community Center, 730 E. Altadena Drive.  And you can visit the Historical Society Monday, Tuesday and Friday between 9 am and 1 pm.