Drive by and you’ll likely miss this little pocket park on the north east corner of Santa Rosa and Woodbury.  Unless you get out of your car, and walk to the monument you won’t know that it says:  “This park is given to the public by property owners on Santa Rosa Avenue in grateful appreciation of the planting of these cedrus deodara trees in 1885 by Frederick J. and John P. Woodbury.”
The street wasn’t called “Christmas Tree Lane” until later.  A 1926 Chamber of Commerce publication referred to the street as “Deodar Drive” or “Mile Of Christmas Trees.” The same year the Chamber stated, “Forty years ago those seed were planted by Mr. T. L. Hoag, a ranch foreman [who worked for] John and Fred Woodbury.” That’s Tom Hoag in the photo lower below. 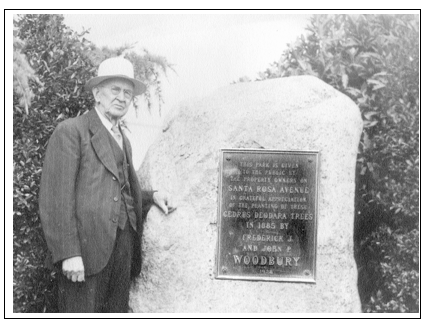 The Himalaya native cedrus deodara seeds were imported from Italy, and then planted in cold frames at the ranch. In the early 1880s Tom Hoag transplanted about 100 trees to what was to have been the driveway of John’s grand home – one that was never built due to the real estate bust of 1887.  By that time the saplings were two feet tall. Eventually the driveway was re-purposed as Santa Rosa Avenue and in 1920 was decorated with Christmas lights for the first time. For more than 40 years Tom Hoag was the honored guest who officially turned the lights on at the annual Christmas Tree Lane lighting event. He died in the 1940s.

What we don’t know is the significance of the monument featured in the photo below. It’s closer to Woodbury Road than other features in the pocket park, but almost invisible as you drive by because of the trees.  If you know why it’s there please leave a comment. 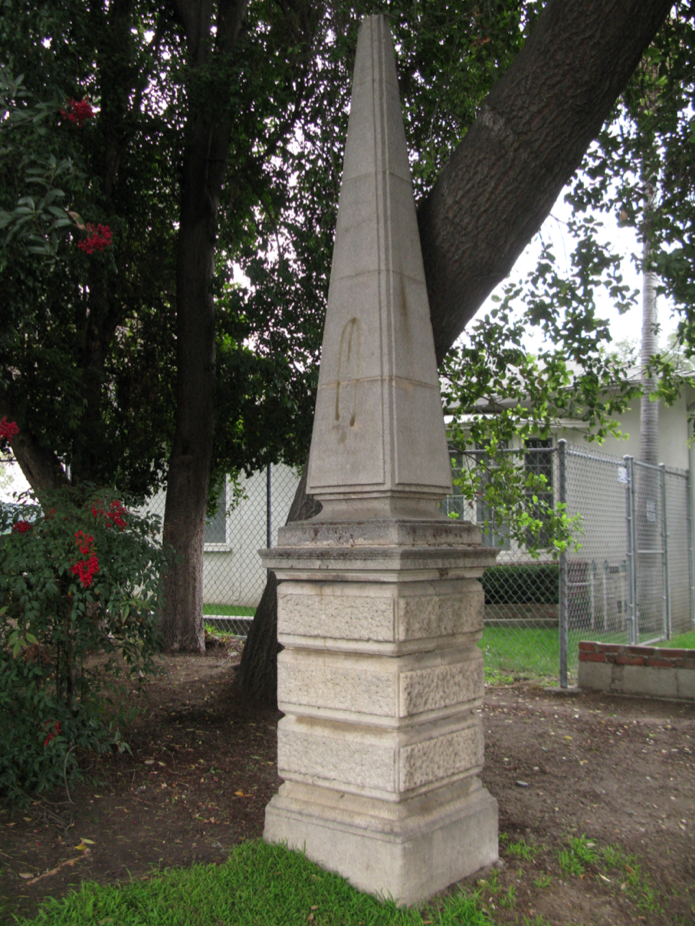 AHS thanks Tony and Maureen Ward and all the volunteers who work throughout the year rebuilding lines, protecting trees, and maintaining the historic stone gutters. Find out more at their website. Christmas Tree Lane Association