And speaking of fires…

On the heels of the 1934 Brown Mountain fire that scorched 3,000 acres above Altadena, the 1935 La Vina fire, fueled by high winds, did substantially more damage. The La Vina fire was named after the sanitarium destroyed in the blaze. (The facility was located at the north end of Lincoln Avenue where La Vina housing development stands today.)

The inferno swept through the foothills from Millard Canyon to Las Flores Canyon, almost destroying the home of Charles H. Cobb. His estate, elegantly appointed with imported exotic hardwoods was landscaped with combustible eucalyptus, palms and lodge pole pines. 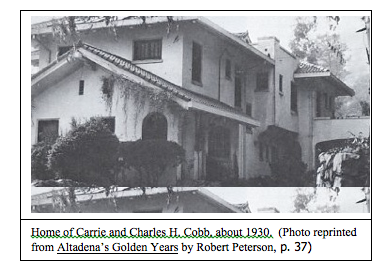 But the 83 year-old Cobb, with a 200,000 gallon reservoir he’d installed 15 years earlier, was prepared for the fight. (The reservoir is still there, about a quarter mile above the ruins of the house, and now belongs to Las Flores Water Company.)

According to the October 24, 1935 issue of the Altadena Press, “About two o’clock in the morning [Cobb] was awakened to find that not only his property… but his life and that of his household were endangered. Due to the water system installed on the Las Flores ranch 20 years ago, Mr. Cobb, with the aid of Andrew Anderson, was able to save all of his property with the exception of damage done to a few trees and shrubs. Mr. Cobb handled a water hose bearing 100 pounds pressure, playing it upon a blazing furnace with a few feet of his garage and other buildings, the point first threatened. Mr. Cobb stated that he has contended for many years that the canyons and foothills above Altadena should be periodically burned off by the forestry department to eliminate dangers to property and loss of life, this statement coming from a man who has spent a lifetime in the woods is significant and deserving of careful study.”

Charles Cobb made his fortune in lumber, starting off as a lumberjack in his home state of Maine and later Washington. Prior to retirement he served as president of International Lumber Company. In 1916 he and his wife, Carrie, purchased a substantial part of Las Flores ranch and built their dream home in the shadow of Echo Mountain.

Cobb died in 1939. About 20 years later the house was torn down due to neglect and vandalism. Cobb’s estate, at the top of Lake Avenue, is now a park managed by the U.S. Forest Service.
See photos and read more about the history of the Cobb Estate.
Tags:Fire