Although earlier flooding had taken its toll on Altadena decades before the 1934 flood that devastated La Crescenta, it was this flood that motivated the building of new infrastructure.
The New York Avenue extension bridge was finished soon after the La Crescenta Valley flood. Built by the WPA, it crossed Eaton Canyon wash to connect New York Drive to Sierra Madre Drive.

Altadena  took a direct hit from the 1938 flood and the New York Avenue bridge, pictured above, was destroyed as illustrated in the picture below. 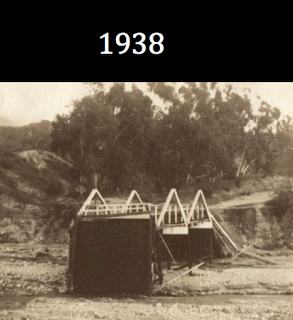 …and a few hours later 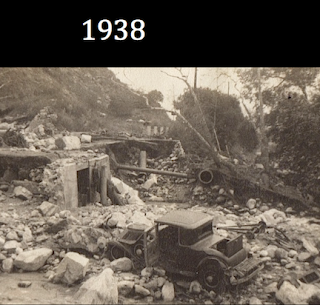 Another 1938 casualty
Those were pretty big gully-washers, but the 1969 flood may have been the proverbial “flood of the century!” The 39.69 inches of rain that fell at the West Fork of the San Gabriel River continues to hold the record for the most accumulation in a three day period.
It’s no wonder that the El Dorado Inn was lifted off its foundation and floated downstream. 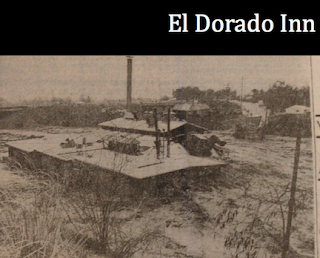 Check out our other posts about Altadena floods:
The building of Devils Gate Dam
The bridge in Eaton Canyon built to withstand future floods