Next time you visit Altadena library, make a point to look at the magnificent painting on the south wall, Millard Canyon at Granite Gate, donated by Mr. and Mrs. Guy Fisher quite a few years ago.  Painted by George Gardner Symons in 1896, the painting is unusually large, about 6 feet tall, giving the chasm scene in the San Gabriel Mountains above Altadena a large-as-life perspective.
The painting features intricate geological details hidden in the soft twilight of sunset.  The longer you look, the more you see.  But even standing close up, you’ll have a hard time making out the minuscule Mt. Lowe railroad car chugging through Granite Gate in the upper left hand corner of the painting. 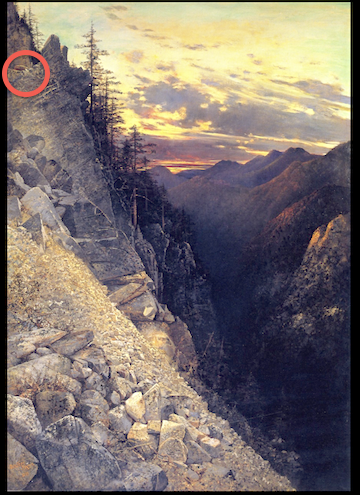 Symons, an American landscape and marine artist, was born in Chicago in 1861. He studied at the Chicago Art Institute where he became friends with artist William Wendt. Symons worked in Chicago as a commercial artist and later studied in Paris, Munich and London. Although his primary studio was in Brooklyn, New York, in 1903 he and Wendt built a studio in Laguna Beach, becoming active in western art societies.
Like many western landscape artists of his time, Symons worked entirely out-of-doors, frequently working in Arizona, painting desert and Grand Canyon views. The grand landscape painters, including Thomas Ayres, Albert Bierstadt and others traveled widely. Whether with expeditions, fellow artists or alone, packing-in by animal train was the usual mode of mountain travel. Although Symons is a lesser-known western painter (he is better known for his New England snow scenes) he was recognized in his day. Today his work stands up with surprising strength.  Symons died in Hillside, New Jersey in 1930.
Source:  Donald Brewer, Pack-In Painters of the American West, November 22 – December 23, 1976, University of Southern California, 1976.